Prologue:
Around 800 to 1000 A.D. in the medieval period archaeological records indicate the Viking sword named Ulfberht were so advanced that they would not again be rivaled until the industrial age. Now fast forward in time to the present. Let me tell you that the once almost mystical sword known for its craftsmanship and ability to bring foes into submission faces off against the newest opponent. Now speak not of mythological dragons or far away fairy tales. For many fall prey to this creature in which they deny, perhaps, the elusive nature unnameable and/or unidentifiable masks itself before the mighty Ulfberht. 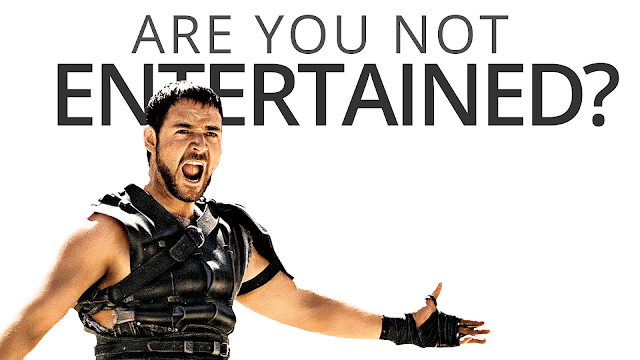 Let me begin by saying it has taken months to come to terms with my own denial. For I have been lied to by many. Throughout 30 yrs I've been an audio enthusiast and everything I've known beforehand forms callousness, not easily convicted by many brands or sensational claims, I now realize even my previous system has been lying to me. William, that brand system whispers, the sound of horns play this way, percussion that way, and vocals yet another. The lie creates a delusion unawares until removed and contrasted to and from another reference. My very presuppositions develops into an expectation before receiving delivery of Tekton Design's Ulfberht speakers. The problem with such is that I then, in a way, create the Ulfberhts in my own image and project upon them my own knowledge about Hifi sound. Little I knew then that I'd be writing this sentence and saying thank goodness that isn't reality as Eric Alexander of Tekton far surpasses my knowledge and ability. Tekton Design has been redefining everything I once knew and now believe.

These massive towers cast forth a shadow before them where I have been from time to time trodding various media tracks in my collection [feeling like a Hobbit on quest to the two towers]. The sharpness of the Ulfberht wielding, piercing, and slashing away at the deception of a callous too bothersome to remain. Testify other products and brands about yourselves and be laid waste before the mighty Ulfs. In my case certain expectations were beheld and when the Ulfberhts arrive and were put in place, dare I say,  "I am unimpressed"! They did not sound as my expectations beforehand but rather quite differently. After thirty or so minutes of listening my first realization occurs, "I do not feel fatigue"! At the SPL I am listening that is a big deal BECAUSE MY PREVIOUS SYSTEM FATIGUES AFTER 15 OR SO MINUTES. How's that possible? I mean look at all those tweeters in the MTM array, they have to sound harsh, right?

I mean, I imagine the compression tweeters in my old system times 30 overall!!! 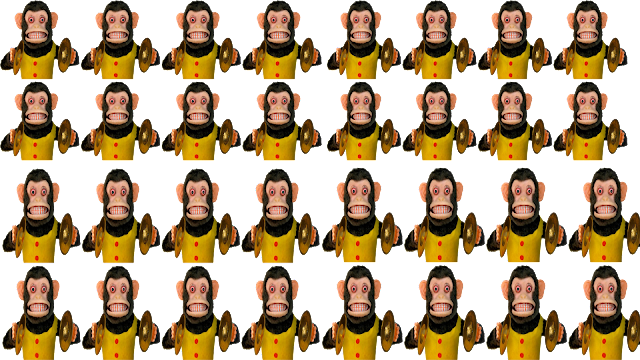 The Ulfberhts have 15 tweeters in each tower which begin rolling on around 275hz est., that is, seven tweeters in two poly arrays [though a straight line can be drawn down in as a line array] above another tweeter  [rolls on at an est. 5500hz] which acts as the only high frequency speaker between yet another seven tweeter array, see below. 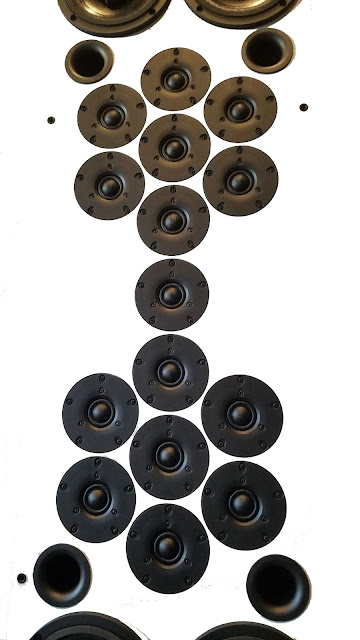 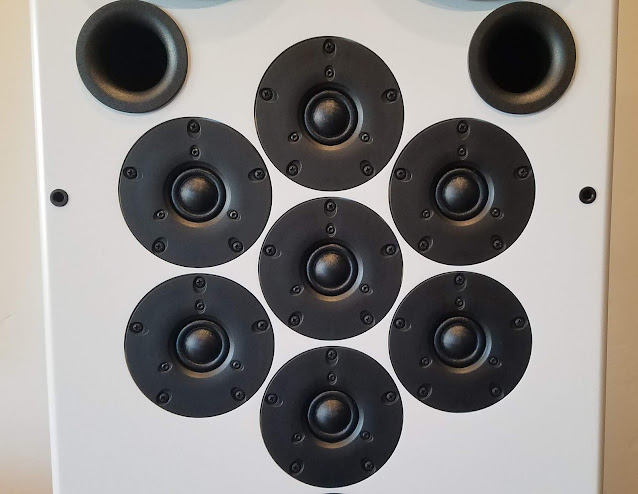 Frequency response and directional properties of the entire array of tweeters depends on what signal is being fed to each [internal crossover wise]. It's quite possible that different tweeters are covering slightly different frequency ranges [from 275hz to 5500hz and above] - or that some receive a delay signal relative to others. Basically, as reviewers have shared the tweeters are one big virtual "9 inch tweeter", but one where designers can control the "size" and "response" separately over different frequency ranges. However, the center "super or high frequency" tweeter in between each tweeter array has a frequency response that extends higher than the circle above and below it. As a result are wider dispersion at high frequencies by limiting the driver area and, at higher frequencies, less power handling requirements. 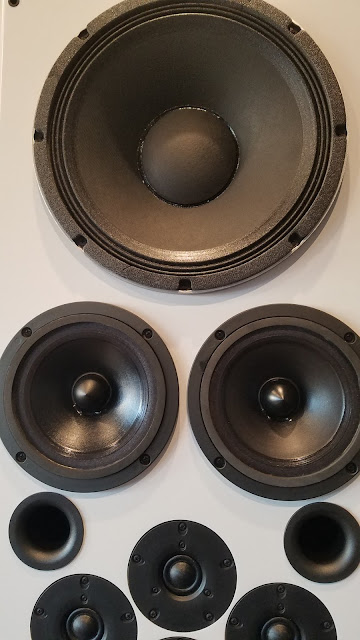 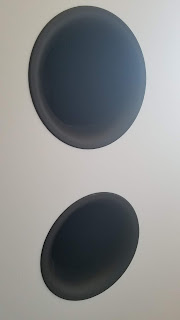 The 12" woofer's rear firing ports seen on back of tower.

High quality speaker posts or terminals. Above the speaker posts are a pair of terminals that accept resistors for changing the performance of high frequencies. 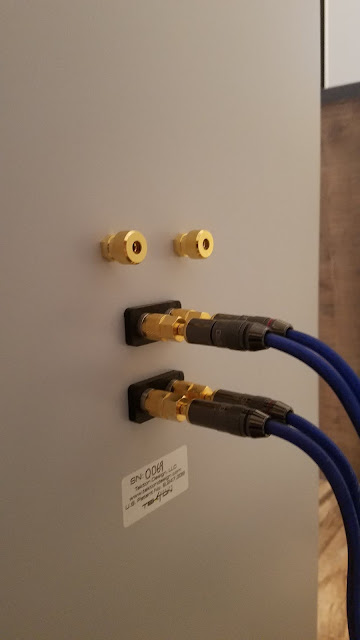 So how do they sound? Let me begin by saying that I deliberately chose the floor plan of my house with the entertainment room in mind. I enjoy more lively rooms than I do dead rooms. For that reason I wanted hard flooring where you'll find no carpeting. I also believe in form as well as function. You'll find no egg crate over windows or high density foam taped to my walls. Having said that when first moving in a casual conversation caused all kinds of echoes as I was fed my own conversation back to me. To say the room was "alive" is an understatement. In order to combat the room's "Active EQ" and impact on the sound, well, I waited until I moved my furniture indoors. The echo chamber has undoubtedly been reduced with things like furniture in place. I'm also experimenting with various plants and trees to cause sound dispersion. As time goes by I'm certain the environmental conditions surrounding the Ulfs will be made better.

Alright, I'm still not ready to articulate my thoughts about the listening experience before the mighty Ulfs. Dare I not hold my tongue? I'll come back after more time in a multi part mini series review. Until then enjoy!
Latest Update: 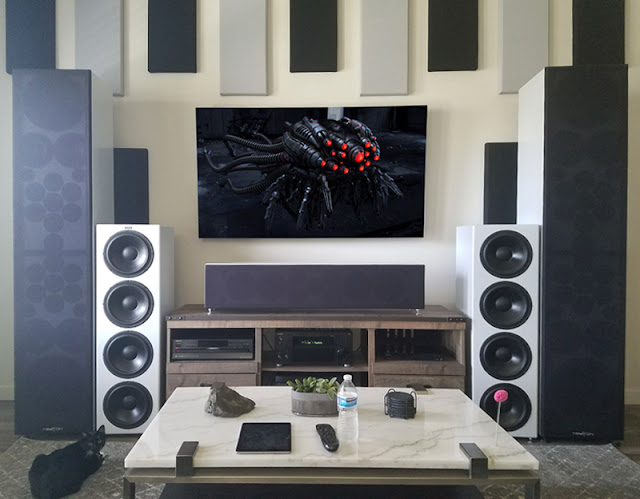