After hearing or rather being told that Tekton Design inflates its sensitivity rating I decided to test for myself. The article published and written by Stereophile is usually quoted no matter which Tekton speakers are the topic of discussion.
One of the first things to understand is that Tekton like many other companies rates its speaker's sensitivity at 2.83 volts. It's important to note:

Tekton Design's Ulfberhts are rated 99db @ 2.83 volts. That is for a 4 ohm tower.
Before testing the rating I first encountered some varying recommendations. Some suggest that a 1000hz tone ought be used as the standard reference. That, however, makes no sense to me because such a tone is going to isolate only the speakers in a 21 speaker tower which play at that tone. So I used Noise which is spread throughout a wide spectrum. If you're interested in the Test tones I used then the CD may be located here: Precision Test Tones. The track is number 83 on the disc.
Second, I used a digital volt meter to measure the audio signal's voltage to the back of the tower. Since the sensitivity rating is @2.83 volts I increased volume until 2.83 volts was achieved: 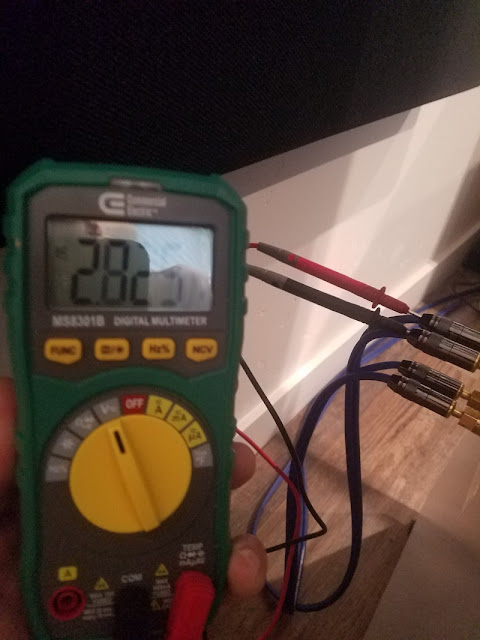 Then with my Decibel meter I measured the SPL in front of an Ulfberht tower from 1 meter away. Note, no other towers, subs, etc were connected at this time. This is the sensitivity as measured [in room] for a single Ulfberht. If you're interested in the Decibel meter it may be purchased here: Professional Decibel Meter 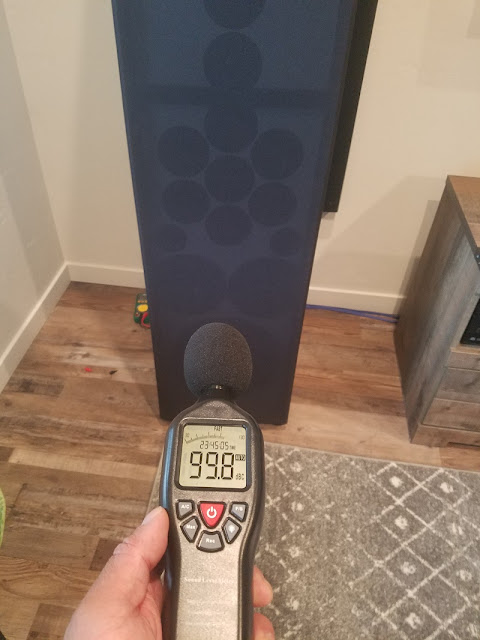 99db @ 2.83 volts for a 4 ohm speaker. Just as Tekton Design publishes.
As to why many wish to emphasize a speaker's sensitivity it's important to consider the DTS/THX Reference levels of 105 [mains] / 115 [subwoofers] db for one Ulfberht main/speaker/tower:
Next, let's address the parroting by critics which suggest that Tekton Design publishes "misinformation" or sensational claims. Note Tekton Design hasn't disclosed how the speakers were measured. Professional reviewers IMO ought admit when they may of disregarded manufacturer's methods in achieving ratings before suggesting dishonest marketing. There is no industry standard or requirement!

Lastly, as far as I am concerned using a 1000 hz test tone will effectively handicap most large 4 way speakers leveling the playing field so your average book shelf may compete. That's the market most lucrative at this time for sales IMO. And, no I'm not suggesting that's the intent or motive of professional reviewers.