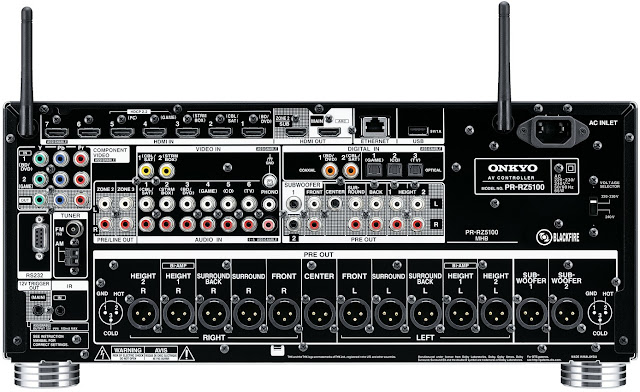 The Onkyo PR-RZ5100 has performed seamlessly in my system for near 3 years. However, as technology has developed the Onkyo unit has fallen behind with each passing year. Three years ago this unit was obtainable for around 2200.00 dollars. Unable now to stream from High Resolution streaming companies such as Amazon Music HD or Tidal in High Resolution I became frustrated with Onkyo's lack of support/updates to utilize these Streaming services. Also, the Onkyo's room correction has a lot to be desired.

I was pretty much set on purchasing an Anthem AVM60 especially for the room correction software. However, I decided on a different approach keeping my Onkyo and just updating the system by adding different devices in order to bring about better room correction and High Resolution streaming. I'm not going to comment on the addition of room correction because I already provided a mini-review on the MiniDSP unit I added to the system in order to integrate Dirac Live 3. My review can be read here if you're interested: MINIDSP DDRC-88A WITH BASS MANAGEMENT - DIRAC LIVE 3

I'll use this time to talk about the Bluesound Node 2i. 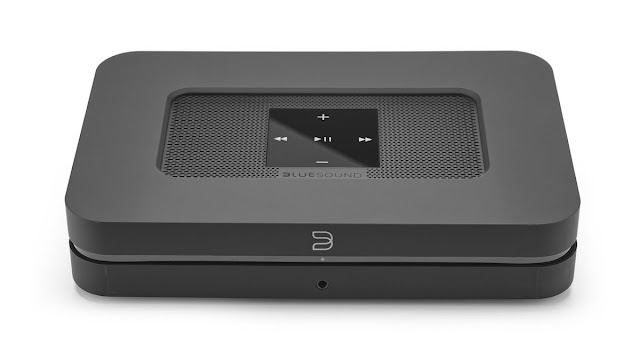 The NODE 2i wireless music streamer easily connects to any existing stereo system to unlock and discover a universe of audio streaming. The NODE 2i connects your audio gear to online streaming services, Internet radio and even your own digital music library. The NODE 2i brings high-res audio to any sound system.
The Bluesound Node 2i integrated into my system with ease. I chose to use the optical output of the Node 2i to an unused optical input in the Onkyo. The Node 2i is now utilizing the "Game" optical port. To stream High Resolution and I do mean true High Resolution of 192 kHz/24 bit I only needed to connect the power cord and optical to my Onkyo. Then in my mobile device [Ipad] I downloaded the app and integrated the Node 2i into my network following the steps provided.
The only issue I encountered was that my Logitech Harmony 700 remote wouldn't operate the device though the device can be operated by the app I run on an Ipad. First device I've ran into that the hundreds of thousands of device codes stored in Logitech failed to operate correctly. I just hate having more than one remote scattered on the coffee table. Ordered up an optional Bluesound remote for the Node 2i just to program the Harmony 700 then I tossed the Bluesound remote in the drawer where the rest of the half dozen or so remotes remain. Logitech makes the Harmony 700 easily learnable by another remote. On the back bottom of the 700 is a sensor you just fire the desired source remote into command after command while running the computer software.

The optional Bluesound Node 2i remote may be purchased from Amazon. 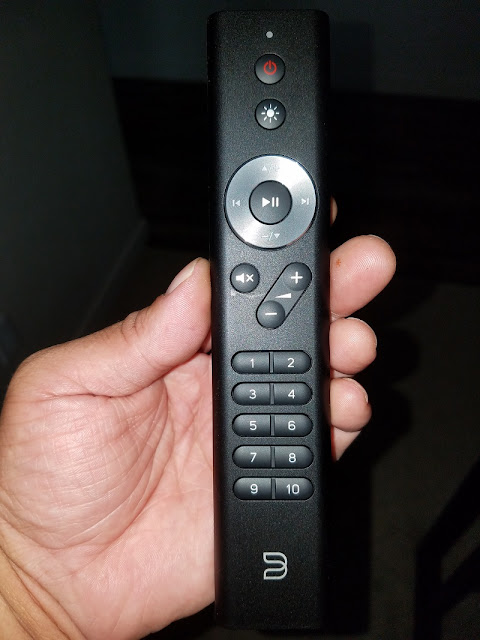 Just letting ya know if you own a Bluesound Node 2i that an optional remote is available. And here's another trick. The app for mobile devices doesn't appear able to power off the device. The device remains on 24/7. Not knowing whether the device is consuming my allotted bandwidth by my ISP I found a way to turn off the device without unplugging it. Hold the play button down on the device for around six seconds. That'll power the device down but it'll also require a manual turn on by hitting the play button.

Conclusion: I've really enjoy this device since its integration. Especially because I can now take advantage of High Resolution streaming by Qobuz.
Overall, between the MiniDSP and BlueSound Node 2i the upgrades cost $1600.00. That's far better than having to update to another Pre-Pro such as the Anthem AVM60 for 2800-3000 dollars.